This article covers creating barebones SDL apps for the WebOS PDK.  The following topics are covered:

Ok, let’s dust off those C skills and get to work.  First, of course, you need to setup your environment.  The Palm folks did such a good job explaining how to setup your development environment that I would be silly to try any better.  This tutorial is written from a windows-centric perspective, I love my Mac friends too, I just don’t have the privilege of owning one!

After you’ve installed the PDK, configured your environment and all that, it’s time to start a project.  I find it easiest to copy the palm included simple sample project found at C:Program Files (x86)PalmPDKsharesamplecodesimple into a new directory.  When you load up the sample project you might be shocked to see how much code there is, don’t panic, pretty much all this code is for OpenGL stuff.

I’m all about keeping things simple, so I chopped down the the sample app to the barest essentials.  Here is my barebones version of hello world.

Palm includes 3 scripts in the sample that help you build the plugin executable and upload it to the device.  If you’ve renamed your project then you’ll need to modify the highlighted references below so that sample and Sample.cpp point to the correct place location.

As you may have guessed, this app prints output to the console.  The only way to see this output is to ssh into your device and execute the app from there.  Not very practical for an app that runs on your phone, but now we have a barebones base to build on.

Just a quick note, if you are testing the following code on your windows machine, you will start getting linker errors once we start using the PDL functions.  The errors you might see are unresolved symbols for _WSACleanup _gethostbyname _gethostname and _WSAStartup.  The solution here is to include a dependency for ws2_32.lib in your project linker dependencies. 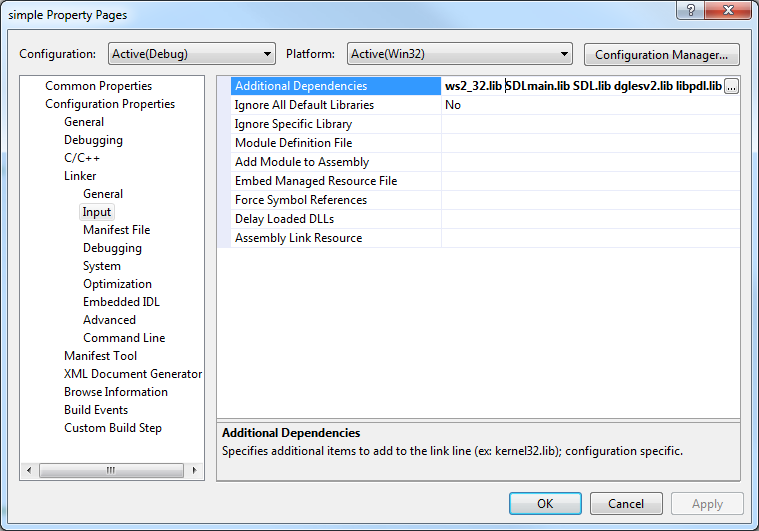 Alternatively, you could add the following pragma to the code.

Is the user running a Pre, a Pixi or maybe even a RoadRunner?  Let’s find out and set the screen resolution appropriately.  Because I’m not really interested in printing to the console from here on out, I am going to remove the include file along with the fprintf call.  There are 3 new data types in the following code:

I believe this code is fairly self-documenting, but let me point out a few lines.  Line 16, if you haven’t been faithful to your C for awhile you may have forgotten about notation which references the address of the variable, remember to look at function parameters to see whether they take a pointer.

The 10-minute guide to Ares for WebOS

This is the 10-minute reference that I was looking for when I started using Ares for my WebOS projects.  Topics covered: UI Basics Widget Fundamentals Using Widgets the Ares Way