15 days ago, I set out to determine why I couldn’t use my Palm Pre on my Xbox 360.  We all start somewhere, but I started with absolutely no knowledge of the composite gadget framework or Palm’s rockhopper composite driver.  In retrospect, I spent a lot of time asking silly questions and researching irrelevant things.  But once again I have been rewarded for persistence, while picking up some great knowledge and tools for the future.

For the last 2 days, I have relished the joy of discovery.  Truth be told, this problem was solved 2 years ago by one Felipe Balbi on the linux-usb mailing list.  The next logical question is why the problem exists on so many devices if it was fixed 2 years ago?  Am I really the first person to discover this problem and solution and actually care enough to try and get it fixed on Palm and Android devices?

Read on as I reveal all that I know. (Palm users can skip to the good stuff by grabbing the latest UberKernel release and plugging in to their Xbox 360)

I am going to describe the process by which data is transfered from a host to a device using the BOT protocol.  Before doing so, I need to present two of the data structures that are used to send data and reply with status.  These data structures are defined in great detail in the spec for the USB Mass Storage Class.  The definitions here are pulled from Alan Stern’s monolithic file storage gadget.

I have to point out something incredibly useful that is defined in the spec.

Signature that helps identify this data packet as a CSW. The signature field shall contain the value 53425355h (little endian), indicating CSW.

How does this help?  For those of us running usbmon, you can easily identify CBW and CSW which will allow you to reverse engineer the data contained in the structures.  For instance, this string from usbmon:

In the first line, 55534253 identifies a CSW (convert to little endian), whereas the second line 55534243 is a CBW!  When transferring data using the BOT protocol, the basics work like so, to keep things simple I’ll refer to the host as the Xbox and the device as the Pre. 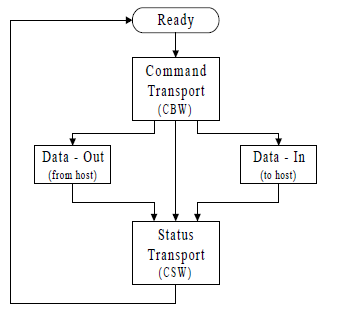 All SCSI commands are wrapped by the CBW struct.  Regardless if we are reading/writing data or requesting device information, all of these commands arrive in a CBW payload.

The problem, originally patched by Felipe Balbi back in September of 2008 is best described by the author.

So going back to steps 1-3 above, here is what happens:

The Pre receives the CBW, it looks at the length of the CDB and notes that it is wrong.  Because the correct logic doesn’t exist to handle this particular size (10), the request is dropped on the floor.

The solution is quite simple, check the length of the command and fix it if need be.  A more generic fix that can handle varying faulty request lengths is what Felipe submitted.

Why the Problem Still Exists

In 2008, Mike Lockwood from the Android team created f_mass_storage.c which was based on file_storage.c by Alan Stern.

In Sept 2008, a patch for file_storage.c was submitted that fixes functionality with buggy SCSI implementations.  This patch was never carried over to the Android f_mass_storage.c.

In 2009, Palm released the Palm Pre using the Android version of f_mass_storage.c as-is.

In the mainline kernel there is a new f_mass_storage.c written by Michal Nazarewicz, also based on file_storage.c.  This new driver includes the fix for the Xbox 360.  Android has abandoned their copy of f_mass_storage.c in favor of the mainline version.  Unfortunately, since they just did this recently it means that Droid/DroidX/Droid2/EVO users will not be able to use their device with the Xbox 360 until Android 2.3 is released.

My recommendation to Palm is to adopt the mainline f_mass_storage.c. Until then, I am using the following patch to allow my Palm Pre to act as mass storage for the Xbox 360. This patch has been submitted to the WebOS Internals team and will hopefully show up in a future UberKernel release is in the latest UberKernel.

Note to self: Port mplayer to Touchpad

I have been working on porting mplayer over to the Touchpad.  When I work on projects, I write a note to myself at the end of the day to remember where I left off.  This […]

Stories of Warning for HP (Palm)

What are the consequences of a device whose mass storage driver is down-revved?  What dangers loom on the horizon for those that ignore these dangers?  It is these questions that I seek to answer through […]

WebOS 2.x allows us to create services using node.js.  Services are great, but by default they run in a jail that prevents them from accessing the entire device.  For many services this is fine because […]