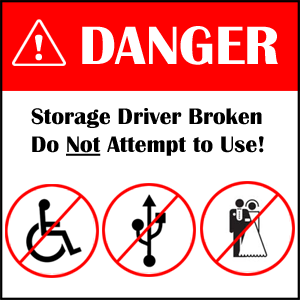 What are the consequences of a device whose mass storage driver is down-revved?  What dangers loom on the horizon for those that ignore these dangers?  It is these questions that I seek to answer through the use of two extremely realistic and likely scenarios.

I am incredibly happy to say that HP has saved the elderly as well as countless weddings.  The mass storage driver in the Touchpad kernel (2.6.35) works well with everything, including the previously problematic Xbox 360. o/

A 91-year old grandmother wakes up one morning in the room of her assisted living home.  She reaches for her glasses and finds a gift-wrapped box on her nightstand.  Like a giddy schoolgirl, she tears the wrapping off to find her first computer, it’s a Touchpad!

The grandmother’s mysterious gifters have put an adorable video on the device that she wants to share with her elderly friends.  Because of the complexities involved with maneuvering multiple wheelchairs, it is decided to put the video on the big screen.  Luckily, the nursing home is equipped with a large flat-panel TV with a USB cable dangling off of it that says Plug cameras and USB drives in here.

The grandmother plugs her Touchpad into the Mitsubishi TV via USB and waits for the TV to show her the list of videos that are on the device.  This always works when her friends plug in their $85 digital cameras, $10 usb thumb drives and portal hard drives.  The list of videos is never displayed because the mass storage driver has been neglected.  The grandmother and all of her friends waste a precious afternoon (possibly their last) cursing the complexities of technology in general and HP specifically.

Later that evening, as the bewildered and stressed grandmother drifts off to her final rest, she sees her Touchpad sitting on her nightstand.  As she fades, her last thoughts are of her first computer and the gifters that would be so cruel as to give an old lady technology that doesn’t work.

The big day has finally arrived!  After surviving the chaotic pre-wedding photo session, the groom realizes that he has left his laptop at the hotel.  At hearing this news, the bride-to-be bursts into tears, What about the slideshow?!? The ceremony is ruined!

The fun uncle pipes up, explaining how he put a copy of the slideshow onto his Touchpad.
“What good will that do?” blubbers the sulking bride as she circles the precipice of insanity.
“Trust me” says the uncle as he gives her hand a reassuring squeeze.

Once the bridal party arrives at the church, the uncle heads upstairs to the PA room.  The only accessible jacks to get to the projector and house speakers are Component video and optical audio.  The uncle swears under his breath, but in the corner of the room he spies a derelict Xbox 360, could it work?

He hooks up the 360, fires up the projector and house speakers and is greeted with the Xbox logo.  In premature excitement, he plunges his USB cable into the device and enters mass storage mode.  Nothing happens.  He unplugs the cable and plugs it back in, silence.

20 minutes later, the bride has lost her grip on reality, the groomsmen are drunk, the cake has melted, the hand-whittled gazebo has been burnt to the ground and the groom and uncle are upstairs playing Black-Ops.  All of this because of a simple mass storage driver.

HP, after reading these 2 stories you have to ask yourself, how can we let this happen?  How can we punish the elderly and ruin weddings?  Well, one sure-fire way to do so is by not fixing the mass storage driver.  When the Touchpad is released and stories like this start pouring in, don’t pretend like you didn’t hear it from me first.

Progress Update I made attempt 3 to use file_storage.c as a means of presenting an ISO image on the Pre as a CD-ROM drive over USB.  I tried grabbing several of the more recent versions […]

It is a dream of many to have VLC running on WebOS.  I thought that with the release of the PDK, I would start exploring this.  Since VLC uses many of the codecs provided by […]

Want a menu that looks like this? Are you using Ares as your development environment? Are you frustrated because this menu doesn’t exist in the list of Widgets? Read on for a full example of […]