My brother and I have been working on a game for the upcoming OUYA console.  We got a little burnt out on a particular design issue and needed a breather, a small fun project to lift our spirits.  So we decided to try our hand at a Live Wallpaper for Android.  1 week later and here we are.

Coming into this project, I knew it would be challenging, there were many things I had never touched before.  As always with programming, much of your success comes from standing on the shoulders of others.  This project was an exemplary example of that.

The actual 3D rendering, physics system and lighting are provided by the ShiVa 3D engine.  It took about 2 days to write the ShiVa game that handles switching camera views, adding forces to jelly beans and triggering animations.  My brother did all the modeling and animation.

To integrate ShiVa into an Android app, you typically just export the project which generates a bunch of Java/JNI that you don’t really need to care about.  I have an open source project that integrates various SDKs into this exported code so I was already familiar with the implementation details.  ShiVa basically provides a GLSurfaceView implementation, like any openGL engine would.  Unfortunately, Live Wallpapers don’t use GLSurfaceView, they instead integrate a WallpaperService Engine which does nothing more than hand you a surface to draw on.  I needed a way to convert the GLSurfaceView and Renderer over to the live wallpaper engine and I did not feel like writing a GL thread from scratch.  The main reason I use ShiVa is so that I can spend my time designing my game, not my engine.

GLWallpaperService to the rescue!  This open source project helped immensely, it took around 3 days of work to perfect the whole ShiVa/Wallpaper integration.  The list of tasks were:

On that last bullet point, sometimes limitations have to be worked around in a creative way.  The problem is that the ShiVa engine can’t run two instances at a time because of some file locking that occurs inside the engine (to the best of my debug ability).  But, a live wallpaper can be running in the background AND be displayed in a preview window.

To overcome this, I made the decision of rendering a static image/text on the preview window.  It’s kind of cheap but it gets the job done. 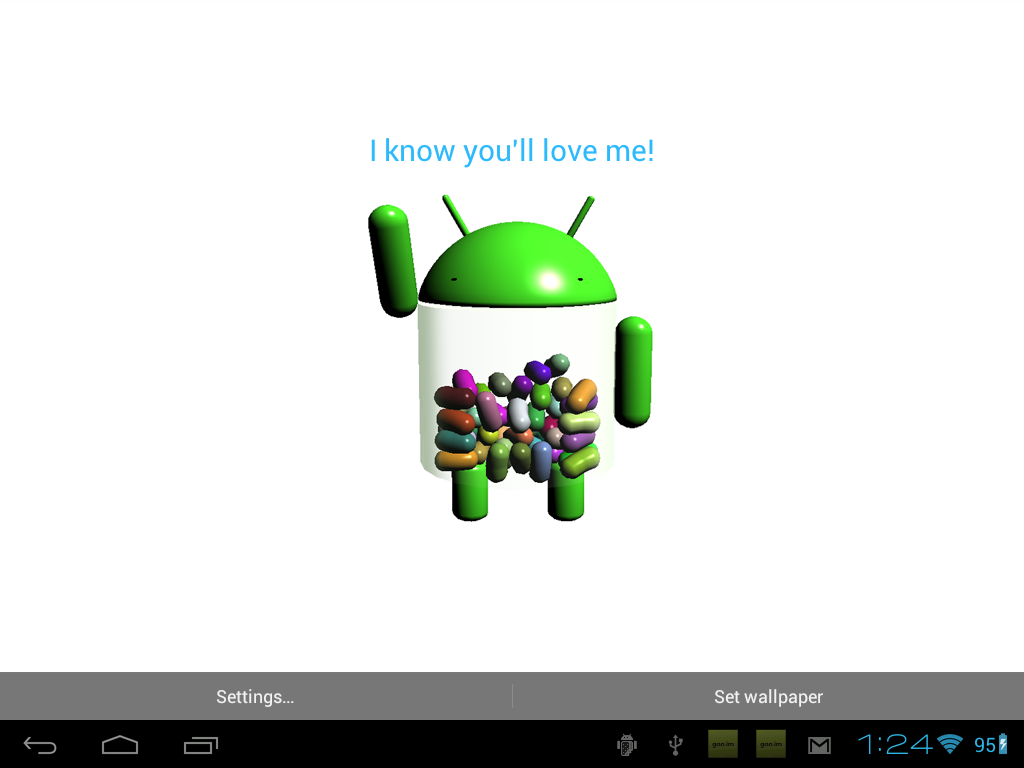 Looking back over my commits for the last 7 days, I can easily find the one that marks the completion of the ShiVa integration as a live wallpaper:

I wanted a classy ICS experience with a settings screen front and center, ability to hit my social network pages and some smooth sexy scrolling.

Obviously the first thing I did was use ActionBarSherlock.  Really, this is a no-brainer and I’m surprised that Google hasn’t replaced the support package with ABS by now.  I made a couple visual layout widgets, scribbled out a few designs and went to work.  This was one of the most time consuming tasks just because I iterated on the design several times.

The first issue was that I wanted the sexy ICS on/off switches.  You can see below that I got them, backwards compatible down to android 2.1 thanks to an awesome open source library called android switch widget backport. 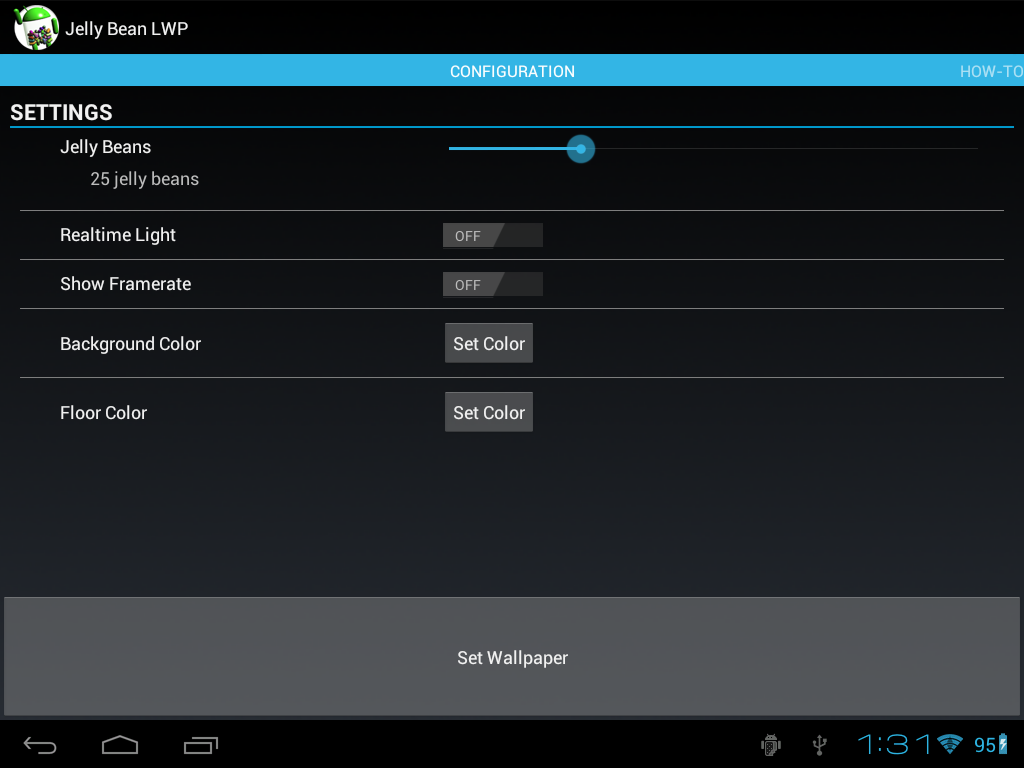 The next thing I wanted was a nice color picker.  Once again a few minutes on google uncovered a gem called devmil android color picker.  I made a few hacks and was quite pleased with the results. 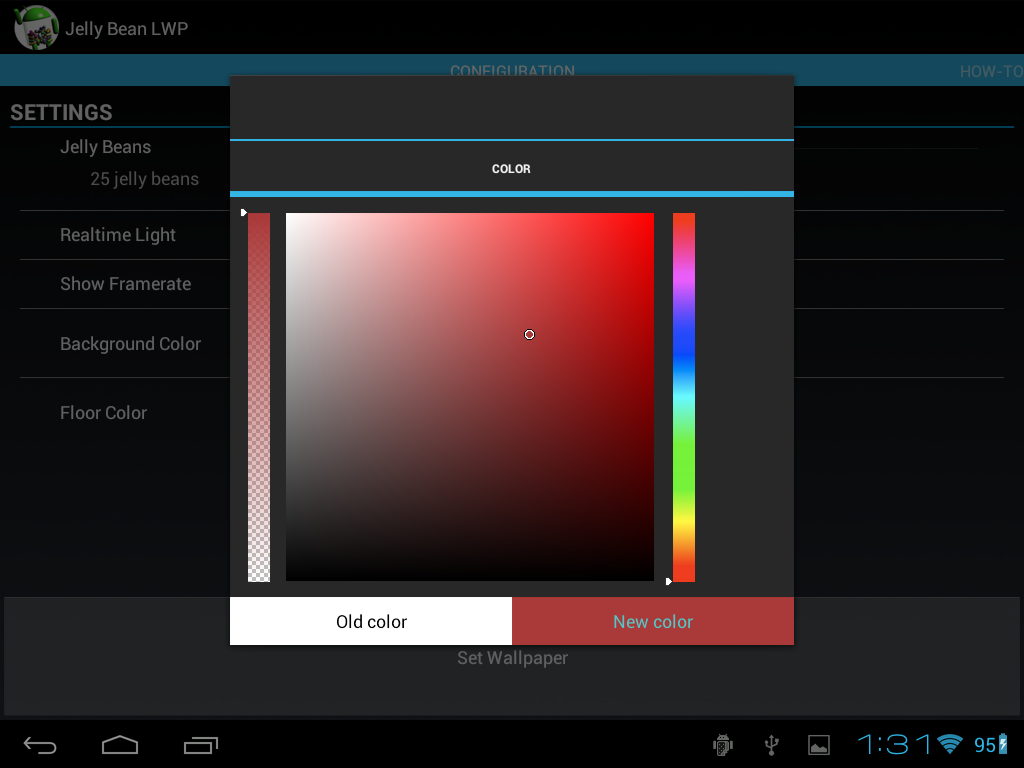 That’s a total of four amazing Apache license based projects that cut tons of time off of this 1 week project.  My design skills are not amazing but this is definitely the best looking live wallpaper settings app that I have ever seen AND it looks great on the handset as well as the tablet. 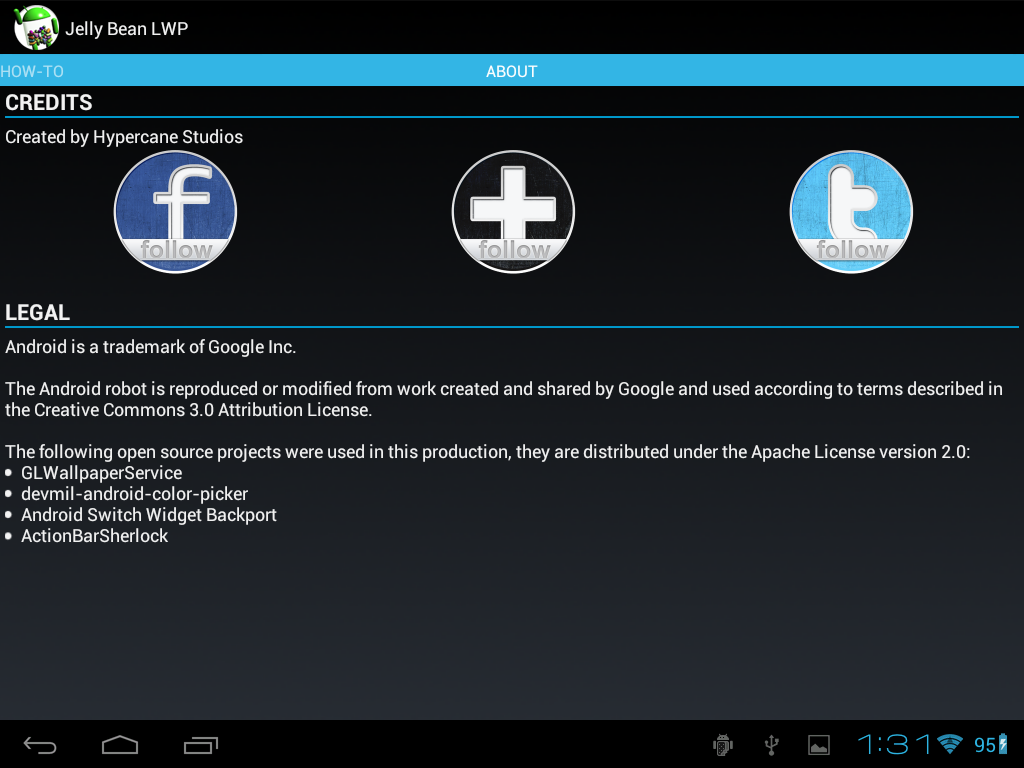 After wrapping up the Android interface and wiring everything together, I had to do the stuff I hate, marketing.  One of my deficits that I’m continually trying to work on.  This is the step of creation that I always forget about and that I struggle to get through.  But yet it is kind of essential if you want to make any return on your work.

So I sat down and did my best to write some good app store copy.  I struggled to get good screenshots to use in the feature graphic.  I sat in photoshop for a few hours, bothering my brother at one point to make some cool looking text.   I ended up with this.

It always amazes me how complicated even simple projects can be.  This was a difficult project to get right that spanned Java, C++ and LUA.  I didn’t mention the 1.5 days spent writing a licensing and in-app purchase verification server prototype in Google App Engine (that I later abandoned) or the 0.5 days spent mastering my native build process and proguard some details are even too boring for me to talk about.  Now that I’ve taken care of the boring framework, I can spend time writing/updating live wallpapers!

As we are narrowing in on the release of our game, we turned our attention on the game performance.  Our low end target is an Android HTC Inspire, mid-range is an HP Pre Plus and […]

TOP SECRET EMPIRE PERSONNEL ONLY You’ve done it!  You’ve finally found the droids you were looking for.  But hey, wait a minute, they don’t even power on?!? How are you supposed to re-purpose them for […]

Many Android devices have an LED next to the camera lens that can be used as a flash.  I’ve been doing some research on the so-called Torch mode of this LED.  Torch mode simply turns […]