This article will present some core physics equations in a new light!  I will even be so bold as to christen these equations as The Fundamental Equations of Platformers.  The sample code here is presented in LUA and for my prototyping I am using the ShiVa 3D game engine.

When designing physics for a platformer, the 2 fundamental values required are:

With these values, we’re able to use the the kinematic equations to make a character jump and eventually touch the ground again.

3/22/2014 Please see comment by Ricky below. These simple equations are the calculus versions broken down for simplicity, not the kinematic equations.

As a refresher, the 2 basic equations we’ll use are:

This would be a typical implementation.

This code is at the heart of platformer physics, but when it comes down to it, these equations alone kind of suck at being useful. Picking random values isn’t the best way to get a good feeling platformer. Let’s look at a method that will help get you started with initial physics values.

The Fundamental Equations of Platformers

What makes more sense is to calculate gravity and initial jump velocity by picking 2 simple properties of the universe:

Which leads us to the first two fundamental equations:

So what we’ve defined above are:

Assuming that we are standing on the ground preparing to jump, we start with the kinematic equation

Solving for a yields

Assuming that we are standing on the ground preparing to jump, we start with the kinematic equation

The end numbers haven’t changed, I just failed to show my work. The spreadsheet at the end of the article was not affected.

There are a few ways to do early jump termination but I am going to propose a method that is based on a single parameter, minimum desired jump height.  The idea is to calculate the downward velocity required to achieve this minimum height. I now present the 3rd fundamental platformer equation (which is a well known kinematic equation):

To use this, we choose our minimum jump height of 1 unit and we arrive at:

So then in code, when a player releases the jump key, you’d do the following:

The one caveat with this method is that, depending on your world, you may set a minimum jump height that is impossible for a human to hit. Because obviously we have limitations, like not being able to press and release a key much faster than 200 milliseconds. So, as a friendly check, we can calculate the last possible second that a jump can be terminated using this equation:

To prove out the equations and method, I did my best to recreate the physics from Mario 1 inside the ShiVa 3D game engine.  Based on my reverse engineering efforts (see details below) I arrived at the following values:

So plugging these into equations 1, 2 and 3 we get

Now see it in action, spacebar jumps. Well, not anymore since chrome doesn’t let us embed stuff like this anymore 🙁 See the Platformer Physics shiva example on my github.

How I measured Mario Gravity

Starting with Nestopia, I recorded a video of mario jumping.  I then saved that out as an AVI with uncompressed frames.  After pulling that into VLC Media Player, I used the scene filter to save out every frame of the video to a png.

The video was recorded at 50 frames/second which was a bit overkill, but this gave me 0.02 sec/frame.

Instead of counting everything in pixels or trying to convert to meters.  I decided to use units of game height.  In Mario, every object is based on a square of 16×16 pixels.  So I called this a game unit. Using photoshop, I overlaid a grid to display individual pixels. Notice that mario sits 1 pixel into the ground. 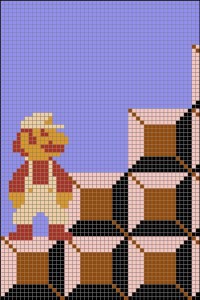 It was a head scratcher to first determine how to measure the jump distance of mario based on how his animation changes when he jumps.  I decided to measure using the bottom of mario’s feet when standing and the bottom of his lower foot when jumping.  This is because when standing, mario’s feet extend 1 pixel into the terrain and while jumping, his bottom foot has a 1 pixel toe that at the highest jump point will extend 1 pixel into any reachable obstacle.

I thought I’d look up the values for Mario’s gravity and see if perhaps I could compare my measurements.  I was excited when I found Acceleration Due to Gravity: Super Mario Brothers until I saw their measurement of the height of mario to be 39 pixels.  Perhaps this could have been due to over or underscan on their TV?  I mean, this value isn’t even a power of 2.  Mario is 1616 small and 1632 with a mushroom, everyone knows that!

This method may not match the exact jump model that mario uses, but as an approximation, I think it works very well. I’ve created a Google Docs template with the above equations built-in. Feel free to make a copy of it to calculate some starting values for your own platformer. Also if you’ve used the above method or see an issue with implications of the early jump termination method, please leave a comment!

This is an attempt to replicate a Newton’s Cradle device.

Exploring the use of the Ableton Push 2 in Unreal Engine 4 as a super-powered game tuning device. […]