Most ShiVa games have a single STK pack file. The reason why is because it’s easy to hit the export button and dump everything into one giant file when you publish. On many PC platforms like Desura and Steam, the client does a proper diff and then only downloads chunks of files that are different than what he already has.  In Rage Runner, our pack file is about 250 MB. In an update where the only thing we’ve changed is 2 kb of XML, the player still has to download the entire 250 MB pack!

This is obviously wasteful. In this tutorial I am going to detail:

Get the Sample Project

There is a sample project available below. All of the screenshots and code samples in this article come from this project.

The first step is to create STK files that contain only your content. We are going to make an STK file that has all of our models and materials. To do so:

When packaging STK files with your game, they need to be placed in the root of your project folder. This is true for exported projects as well as when testing your game in the editor. 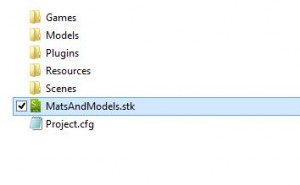 To load a pack file, we need to add it to the cache:

If the pack is successfully loaded, you will see the log message.

If you don’t see that message, then there is either a typo in your code or the STK file isn’t in your root project folder.

To use a model or resource that is in an STK file, you add the prefix of the STK name but without the .stk extension.

This is the same for sound, materials, xml, etc. Simply add the STK prefix with a slash and your resource(s) will be found.

NOTE. The models and resources should NOT be referenced in your game editor! This can be hard to get used to!

One complication with this way of organizing assets is that whenever a resource is updated, the STK file must also be updated. This can make for a terrible workflow when you want to do rapid prototyping. A simple work around is to first check if the resource is referenced by the project, if it isn’t, check your list of known pack files. The idea is that you can prioritize referenced resources so that during rapid prototyping you can drag your resource(s) into the game editor so they’ll override the contents of the pack files.

Here are two simple functions that do this.

Here’s how I’d use these functions.

As of ShiVa 1.9.2, there are some considerations you should be aware of when packaging a game that has multiple STK files.

On Windows, when a game is launched, the STK to load is chosen based on alphabetical order. You will need to:

On Mac, when a game is launched, the STK to load is chosen based on alphabetical order. You will need to:

Linux also has some STK load order issues but the best solution here is to make a bash file that deliberately calls the STK file to load. When you export a linux build, you get an executable baring the same name as your STK file. For YourGame.stk you will get an executable called YourGame. So the bash file would be:

The obvious application for STK files is that they can help deliver incremental updates to players in small manageable pieces. But there are other applications as well, like allowing players to mod your game by simply replacing your STK textures pack! Or customizing aspects of your game by loading different packs at runtime!

In a previous design diary, I talked about screen boundary detection.  What is an easy way to determine when an object has left the screen so that you can act on it? I discovered a […]

We needed a laser for our WIP space schmup.  This solution seemed to be the most obvious way to create a variable length laser.  I am hoping someone will post a comment telling me how […]