Please note that this post is from a time where I knew nothing about UE4. It is full of things you should probably not try and mimic. I’m leaving it here for posterity sake but am adding annotations where appropriate to let you know there are better ways in 2018.

My dumpster of random questions and answers for UE4.

This example is working completely backwards from blueprint to C++. It would be much better and easier to create the Particle and Audio components in the C++ actor using CreateDefaultSubobject. Then allow blueprints to override which particle system/audio clip to use.

Let’s say you have a blueprint and you want to get access to the particle system and the audio file sub-components. 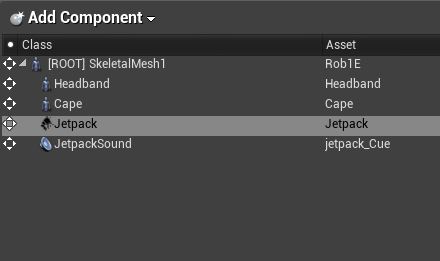 What do you do?

Here’s what I’ve been doing. In the .h file of my actor:

Finally at the end of BeginPlay, do a sanity check to make sure we don’t have dangling pointers:

Logging to the Screen

If you get the error Missing variable type on your UPROPERTY line, it’s probably because you’ve put a semicolon at the end of the line.

How to get a reference to an actor in the level blueprint?

If the goal is to store a pointer to a blueprint class, then it would be better to use something like:
TSubClassOf<AActor> RopeSegment

You can also tighten down which parent class it is rather than using AActor. I would set this to EditDefaultsOnly which would allow the blueprint to set RopeSegment at design time.

Then make sure RopeSegment isn’t null before you pass it to SpawnActor.

You can store a blueprint in your class as:

You can spawn an instance of this blueprint:

How to get delta time?

How to draw hud?

I think at this point I had no clear understanding of what a User Widget vs a HUD was. If someone asked how to make UI today, I’d reply with:

How to get the current camera?

First off, why are you trying to get a camera from inside a HUD? Second, please use the UE4 Coding Standard.

Depending on whether this is a single or multi-player game, you will get the Player Controller differently. If you’re in a Pawn you can just look at the Controller variable, see if it is a PlayerController and if so GetViewTarget from it. Otherwise you’re typically looking at using UGameplayStatics::GetPlayerController.

Just remember that in a multi-player game, PlayerControllers are not replicated to all clients, they only exist on the server and on the controlling client.

How to get the player camera manager?

Just keep in mind that this only gets you player 1’s camera manager.

What is ACharacter? Why are there camera controls in there?

From the docs: Characters are Pawns that have a mesh, collision, and built-in movement logic. They are responsible for all physical interaction between the player or AI and the world, and also implement basic networking and input models. They are designed for a vertically-oriented player representation that can walk, jump, fly, and swim through the world using CharacterMovementComponent.

There are camera controls in there because the example you’re looking at (Top Down Camera) has added a camera and a camera boom to the character.

From the Docs:
PlayerControllers are used by human players to control Pawns.

In networked games, PlayerControllers exist on the server for every player-controlled pawn, and also on the controlling client’s machine. They do NOT exist on a client’s machine for pawns controlled by remote players elsewhere on the network.

From the Docs:
This component tries to maintain its children at a fixed distance from the parent, but will retract the children if there is a collision, and spring back when there is no collision.

In the examples, the Camera is attached to the Spring Arm so that the hierarchy is:
Parent: Camera Boom
Child: Camera

How should I store components in my class?

Ignore all of this. Use this doc instead.

Many of the example use TSubobjectPtr to do this. The caveat with this is that TSubobjectPtr can only ever be set in your constructor using the post construct initialize properties pointer

In the .cpp constructor:

From the docs:
The AGameMode class defines the game being played, and enforces the game rules. Some of the default functionality in AGameMode includes:

Any new functions or variables that set game rules should be added in a subclass of the AGameMode class. Anything from what inventory items a player starts with or how many lives are available to time limits and the score needed to end the game belongs to GameMode. A subclass of the AGameMode class may be created for each gametype the game should include. A game may have any number of gametypes, and thus subclasses of the AGameMode class; however, only one gametype may be in use at any given time. A GameMode Actor is instantiated each time a level is initialized for play via the UGameEngine::LoadMap() function. The gametype this Actor defines will be used for the duration of the level.

Use the official reference for enums. Don’t use TEnumAsByte.

From the wiki. Create a namespace with the enum in it, usually above your class so that others can see it:

Quick Reference for U*

Who spawns the default pawn and takes control of it?

The GameMode does, the interesting stuff is in GameMode.cpp in the function StartNewPlayer()

RestartPlayer() is where the magic happens. This code:

So if you’re trying to prevent the spawn of a DefaultPawn, once simple way is to simply not set the DefaultPawnClass variable in your custom Game Mode.

Is it ok to use flat Classes?

Yes, but only if you don’t plan on revealing their variables/functions to blueprints. All of the UPROPERTY and UFUNCTION stuff requires some special stuff in the header. So it’s easier to just create your classes as a sub-object of UObject.

How to override hit events in c++?

They are called every frame even if you have no gamepad connected. If you’re sharing variables with other input methods, be sure to guard them:

My rope is not behaving as expected. If I wrap the rope around an asteroid and try to pull, the simulation goes crazy with the asteroid translation jumping all over the place like vampire bill trying to rescue Sookie from a dozen attackers.

I noticed that the Unreal implementation uses PX6DOF joints for all joint types in Unreal. In my own physx implementation in another engine, I created this same simulation but using PXSphericalJoints instead and don’t have these types of simulation jitters.

I’ve tried the usual stuff. Enabling sub-stepping (16 at 0.0013). Increasing position and velocity iterations for my rope segments, asteroid and actor (15,15).

By disabling rope physics collisions and enabling substepping (5 at 0.00666) with Rope iterations at 13,4 the simulation looks good. Reducing projection to 0.2 seems to make the simulation less likely to explode.

How to start physx visual debugger?

Run pvd connect/disconnect in the console

To update fixed axis mode, you need to call the initializer:

There is a patch coming in 4.6 possibly that will change this to:

It’s also interesting to note that the DOF lock is nothing more than a physics constraint, not some special physics engine setting or state.

In our game we use streaming levels to load the player into various interior buildings. The player enters an airlock, which is just a loading screen that they can move around in while they wait […]

Getting the Vive motion controller buttons and axis bound in UE4 is one of the first steps to playing around in VR. I had to dig into the UE4 code a bit to find out […]