Today is one of those fun days where I get to wear a few different hats in my independent game development career. We’re bringing some interns on and we need a better way of collaborating on projects together.

It’s actually amazing that we’ve hobbled along using duct-tape (git) and bailing wire (dropbox) for so long. This is a little embarrassing, but I’m going to outline what we’ve been using for the last year.

The advantages of this method are:

Time to Grow Up

I’m a serious person and now it’s time to get serious about team collaboration. Today I’m setting up a linux server on Azure that will be used to host a Perforce repository for our team that’s using Unreal Engine 4. Under the Bizspark program, we get $150.00 of free server credit each month. So it seems silly to pay for hosting without first exhausting this resource.

Azure is pretty darn cool. If you like geek panels, there are plenty to be had: 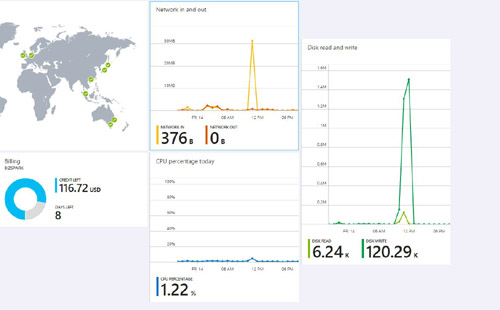 There are a lot of choices when setting up a virtual machine. Here is a record of some of the choices I made. My overall goal was to get the minimum viable server configuration so that all of my free credits would go towards bandwidth and storage. My biggest nightmare is for production to stop because we’ve exhausted our free credits 😮

As an overplanner, I hope that I have greatly over-estimated our usage (fingers crossed).

For server tier, I only need basic, not standard. The higher tier includes load balancing and scaling, not something we need for a code repository shared among 4 people. We’re all in the same hemisphere anyways, but for that matter if there was a team member in china, I’d just see if they could tough out the latency 😉

Perforce does better with more memory, but then again, what doesn’t? How much is enough? Their kb article has the equation:

There are a lot of files in a game. You’ve got static meshes, textures, materials, blueprints, skeletons, animations, sound clips and more. All of these are separate files. If I estimate that our game will contain:

For the Unreal Engine binary distribution alone we have 13,612 files:

So all said, 35 MB is all we need to satisfy perforce? Pffff. This is far more modest than I thought. The lowest tier on azure has 768 MB of memory which is about 22X more than what we need. But that’s actually the amount of memory allocated to the entire VM, so after the OS is up and running… let’s see, Ubuntu Server requires 192 MB these days:
(768-192) / 35 = 16X

I can live with 16X headroom, this allows for slop in my estimate and also unforseen memory usage on the server side. So I’m starting out on the lowest server tier and will monitor our memory usage. If we start getting paged out AND we actually notice it AND it’s hindering our productivity then we’ll look at bumping up to the next memory tier. But as the original goal is to go spartan, we’ll stick with the lowest tier.

An extra dollar per 100 GB gives me peace of mind if my local data center is destroyed. For 500 GB of content, I’ll pay an extra $5 dollars per month. If it hits the fan, I know where to find a few extra dollars, for now I’m leaving this at Geo-Redundant.

On Azure, you are billed based on used storage and the threshold is 1 TB. So any unused disk space that is laying around isn’t billed. 500 GB sounds plenty for our repo. Our largest project so far has been around 5 GB with all the assets and code.

Going to leave this at None, but honestly didn’t spend a lot of time researching it.

I see that as part of the install perforce package installs, it created a perforce group/user and that it also created a default folder to place repositories:

Since I just setup a new disk specifically for perforce, why not just mount this directly to /opt/perforce/servers and be done. After fdisk, mke2fs, and editing fstab we’re ready to rock. The first time I mount, I notice that it changes permissions on the servers folder to root:root 755, so we need to chown back to perforce:perforce and chmod back to 700.

A quick reboot test to see if things worked:

I then set depot permissions based on group. Future note, this is how you create or administer groups:

My end goal is to host two depots in perforce:

For a new artist, I want the workflow to be:

Artists will then use the built-in perforce support to manage source controlling assets. When a new version of the engine is compiled, they’ll need to repeat the new artist workflow. My primary concern here is that artists will forget how to use P4V to sync the engine because they’ll do it so infrequently.

Developers will use git to manage the C++ side of the project and will push binary versions of the engine and project to perforce. I feel deceptive using the word developers plural because I’m the only developer.

Here is how the repos overlap for developers i.e. me. Note that project name is Rob1E. 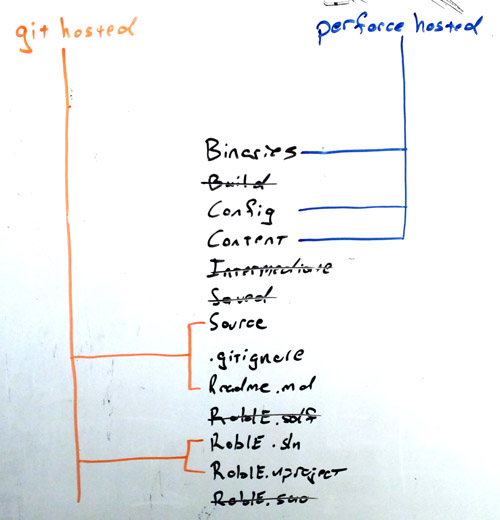 To share the compiled pieces of a game project, I simply compile the development solution and then push the game dll/pdb file found in the Binaries/Win64 folder to perforce.

Why am I using 2 repos? Why not just go all-in on perforce? Or conversely all-in on git?

The last question is easy. Git would be a difficult workflow for artists. I want to spend my day coding games, not solving merge conflicts.

Why not go all in on perforce? My primary reasons are:

I’m sure some of these issues are surmountable and I’d love to be convinced of a better solution by someone. If I ever get to the point where I spend more time managing the system than I am using it, then it’s simple enough to dump my code into perforce.

One potential downside that I foresee is that version tagging might get out of sync between the code and asset repos. But time will tell.

How to use Perforce in UE4

Intro Perforce is a source control repository used to track and control changes to files. You should read the official perforce docs for UE4 first. Then come back here for more details. The benefits of […]

There’s a major bug in our project that is exhibited by beam particles that are not correctly emitting from the socket location that the emitter is attached to. The problem has been seen in every […]

Packaging Unreal Engine After building the latest 4.5 editor, I needed to package it up and move it to another machine. Figuring out which folders were required took me awhile, so here is to saving […]