There’s a major bug in our project that is exhibited by beam particles that are not correctly emitting from the socket location that the emitter is attached to. The problem has been seen in every version of UE4 going back to 4.5. Although the problem is exhibited using beam particles, my guess is that it has nothing to do with beam particles and more to do with the entire skeletal transform being a frame behind.

The current way to produce the issue is:

The first step is to get a solid minimal reproduction of the issue. Our reproduction should try to address the following:

The reproduction project is archived for posterity.

We then added significant forces to the rigid body to get it to move in an oscillating pattern. Finally we attached a camera to the skeleton that was zoomed in on the emitter attachment point so that we could easily observe the alignment of the emitter and/or the drawn debug line.

The results of the reproduction can be seen in this screenshot.

Extending the reproduction by attaching a beam emitter, we can see that things continue to work as desired in the post physics/post update work cases. 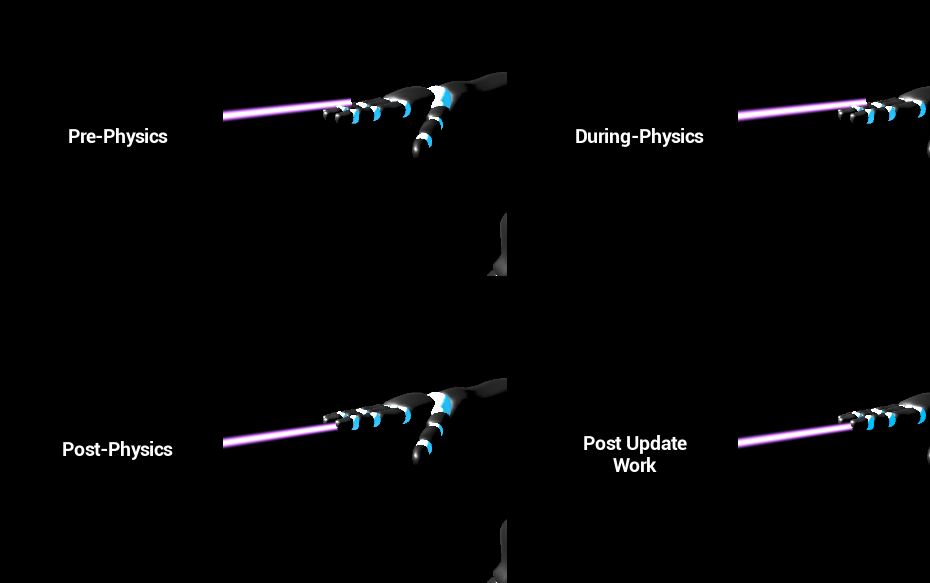 When a skeletal mesh is attached to a physics object or is driven by physics, the socket transforms can lag behind the physics simulation. Depending on your needs, you can overcome the problem a few different ways.

If you only need attached sub-objects (like a particle emitter) to stay in the correct location, i.e. attached to a socket, then change the tick group of the skeletal mesh that they’re attached to so that it is post physics.

If you need to programatically access the transform of a socket, make sure that any work you do occurs in a tick group that occurs post-physics.

I wanted to document a VR paddling system that I designed a few years ago for a VR game called The Grand Canyon VR Experience. The goal was to simulate a standing paddle board experience […]

My journal from the dissection of the platformer game sample. PlatformerGameMode.h Contains a custom state enum for tracking the states of the game. Also exposes this through a getter but there’s no setter, the state […]

I have started a new code repository on github where I will be placing various self-contained Proof of Concept projects for the ShiVa game engine.  Each project will be contained in a separate directory for easy […]